Disclaimer: I wrote this when I was away and seeing London through heavily rose tinted hues. On my second horrific commute this week, feeling overwhelmed by my return to reality and a bit like crying, I found myself needing to read this to remind myself of just how much I love living here (it worked).

During my time away, I felt myself bristle when a Belgian girl at my hostel declared to a table of people that “if you don’t like the royal family what’s the point of going to London. Like, what’s even there?”

WELL, I felt my back straighten and elbows jut out slightly in that way they do when you get defensive, ACTUALLY IT’S THE BEST PLACE ON EARTH.

Earlier this year, when I first decided to take this trip, it occurred to me that I might not want to come back to London. It was a difficult time in my life which had led me to stop seeing the positives of living here. It reminded me of how I felt when I first moved – lost and invisible in a city I couldn’t keep up with.

I considered going home, to the familiarity of a small town where everyone knows each other. I considered moving to Bristol (which I still really do want to one day), to enjoy culture, art, food and friends without the hefty price tag and stressful commute. But as I wrote in September, over the summer, I fell back in love with London all over again and decided my time here wasn’t over. Practically, I was also offered a permanent job which helped seal my decision. While I was away, despite seeing and experiencing the most wonderful things, I did sometimes pine for the city I’ve come to call home.

London can grind you down and swallow you whole, and I understand why many want to run for the hills from it. We certainly all need a break from it, and that’s the very reason I went away, but it’s funny how the moment you’re away, you stop dwelling on the negatives.

You don’t really stop and think about the grey mornings and greyer buildings, the swell and sway of angry commuters on the Northern Line, the fact you’ve probably never walked home past 10pm without your keys between your fingers and a quickened heart rate or to work without being barged out of the way by a jumped up banker with a briefcase. You forget the months where the last few days before payday you’ve had to live off Aldi tinned soup, the fact a pack of Marlboro Lights from Smiths at the station now costs £14 and the average pint will set you back a fiver.

You laugh off the genuine distress you felt at finding out your Uber rating was only 4.2 (then remember it’s probably because you tried to kiss your Uber driver that time you drank an entire vodka luge at Kensington Roof Gardens – working hard to get it back up, we are slowly but surely making progress). You choose to forget the horror that is flat hunting in London (£800 for a room the size postage stamp you can’t swing a cat in) and string of terrible Tinder dates with men who proudly claim to be eternal London bachelors or, in my case, neglect to tell you they’re married. You also forget the days when, despite having a great group of friends around you, you feel utterly alone in this sprawling metropolis. You try and blank out the time your phone died on a night out so you waited hours in the dodgy bit of Elephant and Castle for a night bus feeling terrified, the fact that at least once a week in the summer you feel like passing out on the tube because it’s so hot or the hours of your life you’ll never get back while trying to get to work during a TFL strike.

You dwell instead on the things you miss and can’t wait to get back to. You smile fondly at the determined lack of eye contact you share with fellow Londoners and the fact you all moan every time you have to queue for brunch at a trendy restaurant but do it anyway because helloooo, fancy baked eggs.

The list of negatives pales in comparison to the way London makes your heart soar.
The tap of an Oyster. Trying to read Time Out pretty much on the back of the person next to you. The summer before last most people laughing out loud on the tube would have been listening to My Dad Wrote a Porno (tell me you haven’t been there). The solidarity, kindness and love we share in times of terrorism and fear. The shared anger we channel into protesting Trump, cuts to the NHS, Brexit, period tax, climate change, equal pay – and the privilege that we can actually leave work and go and join a protest about these things because they take place on our doorstep. The shared love we have for Sadiq Khan (and Prince Harry, what a lad). 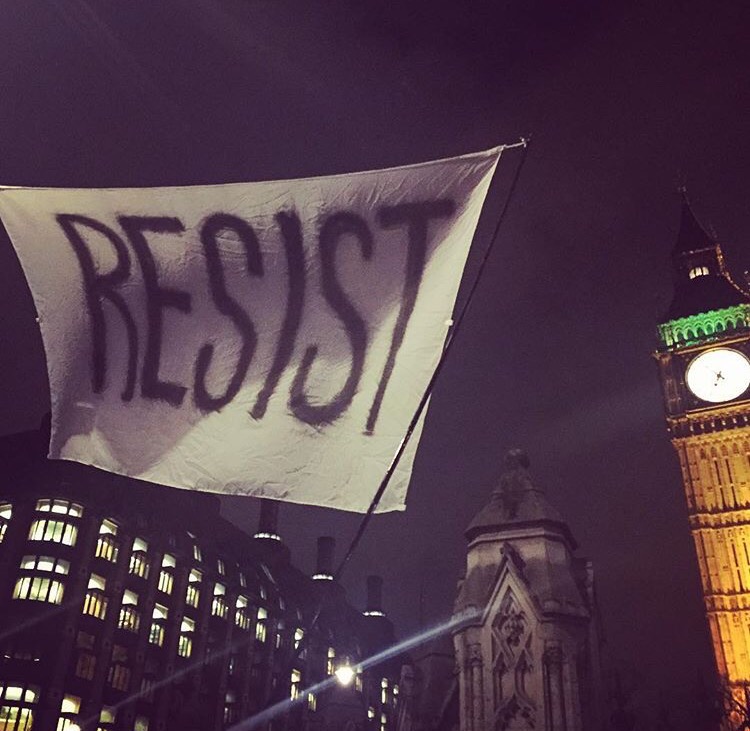 Mastering make up application on public transport. 7am pre-work breakfasts with your best friend, who is the only person you will joyfully and willingly bound out of the house at 6:15 for. Your bootcamp instructor, Graham, who against all odds got you to not only love exercise, but exercising outdoors. At the crack of dawn. Sometimes in the rain. Learning to walk at a quickened pace and mastering the weaving around people, but also realising your tolerance for slow tourists has completely disappeared. Knowing there’s always somewhere to go if you want to keep the party going til sunrise – even if it is the Swan at Stockwell or Mosquitos on Clapham High Street. The times you’ve been out with your work friends for one drink and it really was said with good intentions but then someone says “TEQUILA?” and it all goes to shit. The subsequent work hangovers that are only made bearable by the fact everyone else feels the same and only managing to battle through it with the help of shared rehydration salts and Berocca.

The deer and Autumn leaves in Richmond park; the sun setting over the water and lilies in St James’s; the rose gardens in Regent’s Park; eating ice cream on the deck chairs by the Serpentine on a sunny spring day; Kew Gardens (just full stop); muddy stomps up Primrose Hill and Hampstead Heath and on through Hampstead Village; Clapham Common and its throngs of shirtless twenty somethings playing rounders in the summer. 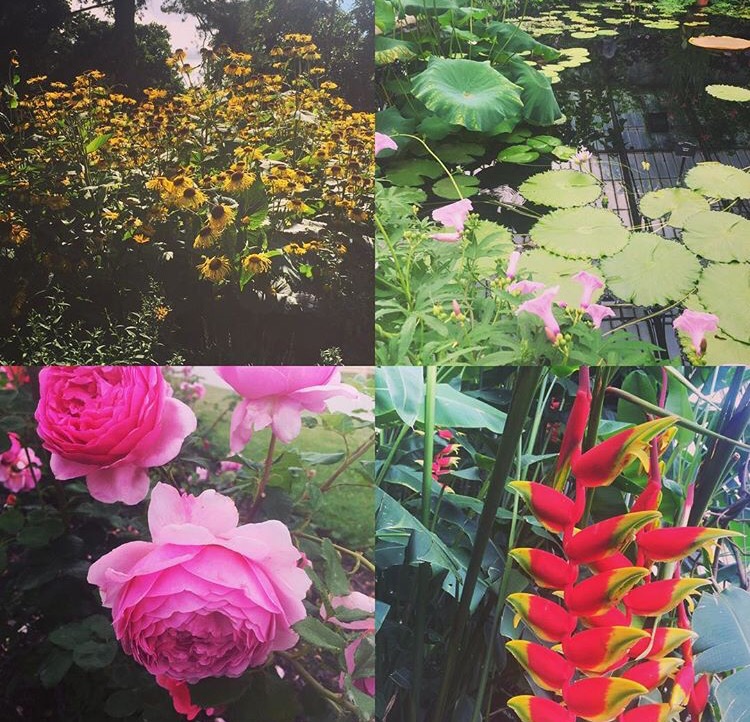 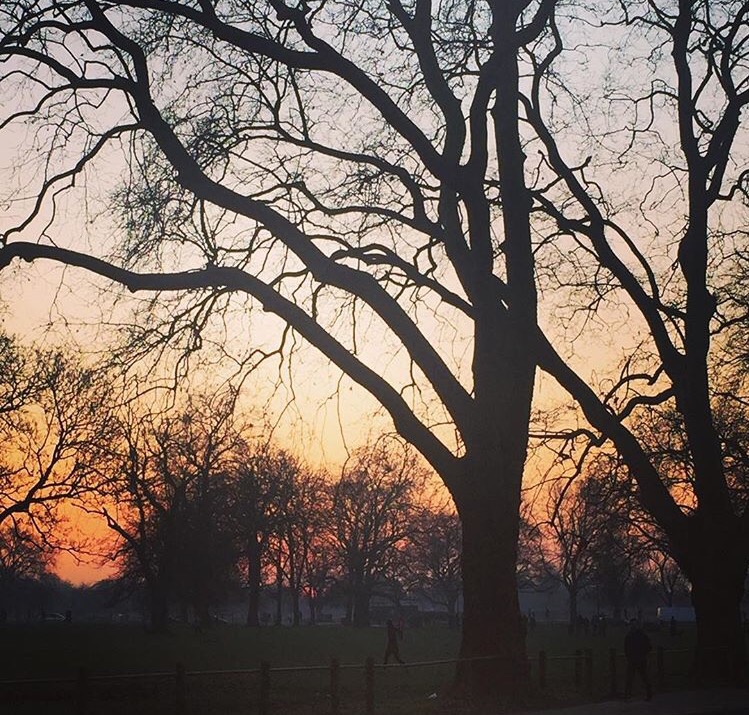 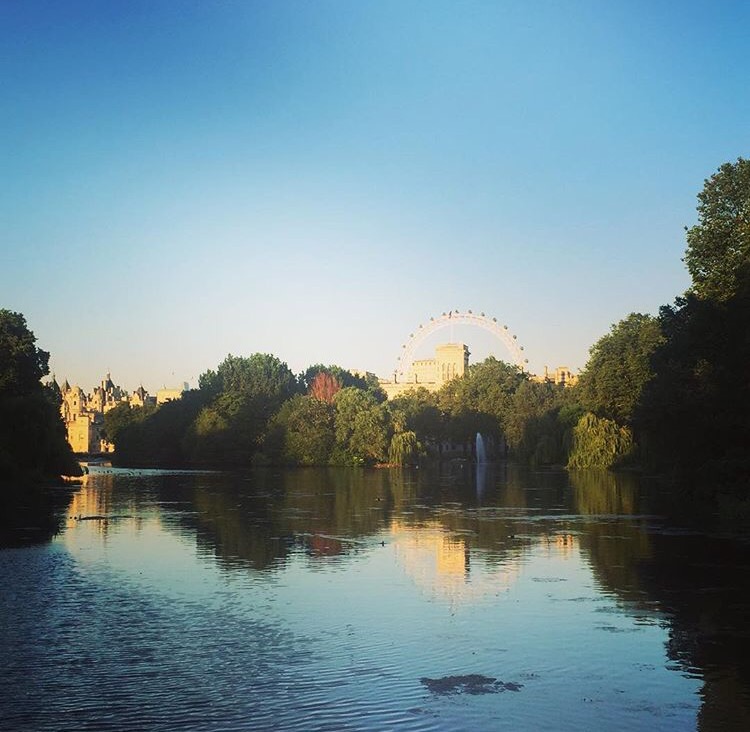 Making memories for Grandkids and being unashamedly in love with the Victoria line (those are for you Harriet). The way the morning sun falls on the juxtaposed architecture of old buildings like The Bank of England with new buildings like the Gherkin in the City. The pastel town houses of Chelsea and the treasure troves off Portobello Road. Jazz at Ronnie Scott’s until 3am on a random Wednesday. Gigs of music from your youth at one of the o2 Academies. A film at the Ritzy followed by Jamaican food in the arcade, or a film on a rooftop in Peckham, or a film in an old converted church, or on a fake beach – they really do make the most of space in London don’t they?!

Women of the World Festival – enough said. Getting a grounds pass to Wimbledon after work in the summer and watching centre court on the screen from hill eating Strawberries and feeling thoroughly British. The joy of Soho during Pride weekend or Ladbroke Grove during Carnival. Tinnies of cider and Pimms after work on a warm summer night. Walking from the Globe along the Southbank and STILL getting excited at the view of St Paul’s Cathedral. Similarly, the spring in your step when you walk across London Bridge over the Thames to work and think “yay, I live here!” (After three years, I still do).

The fact that Thursday is the new Friday, and Wednesday is the new Thursday, and that basically every night is a party if you want it to be. The art, the exhibitions, the comedy, the theatre at your disposal. The richness of British history everywhere you turn. 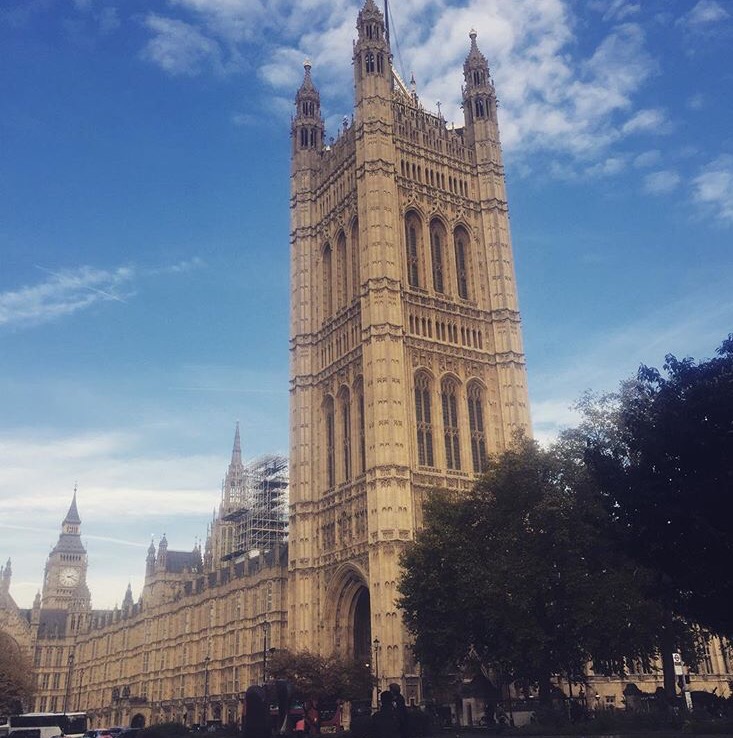 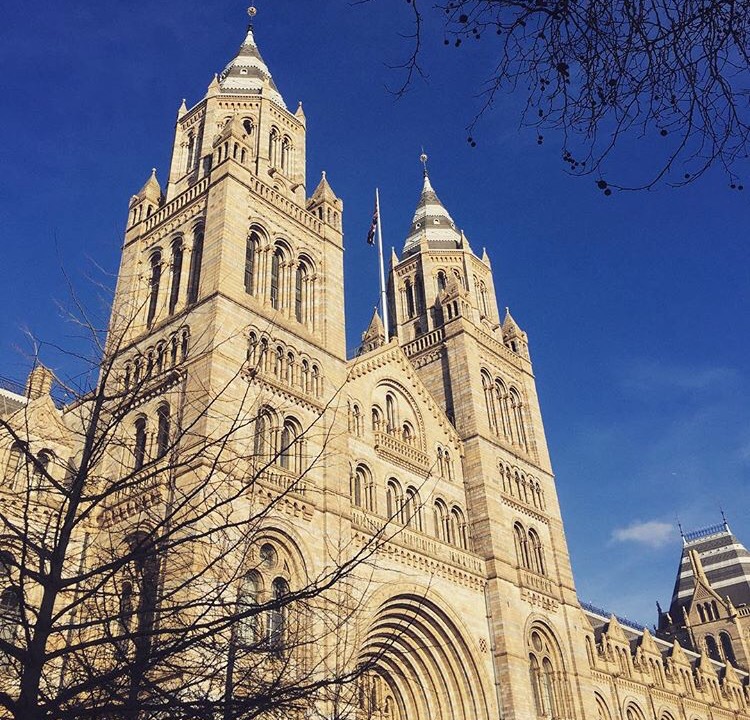 That you can go to 80s dance classes, Beyoncé dance classes, disco Spin in the dark, hip hop yoga and boxing/HIIT to beats if a regular old gym just doesn’t float your boat. The times I’ve danced with strangers on a tube platform or that time we happened upon a random Bob Marley street party near Oxford Circus (and OBVIOUSLY joined it). 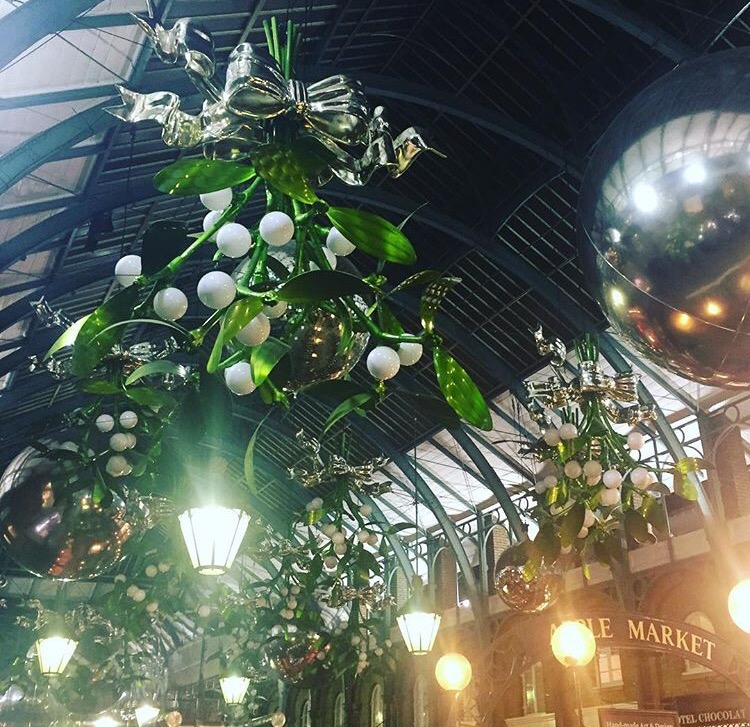 Walking around Liberty stroking fabrics in the haberdashery and picking up handbags you can’t afford for hours on end before buying some pencils and a postcard from the stationery section just so you leave with something in a little purple bag. (My Grandma worked there in the 40s and I love imagining what it would have been like then, too). Platform 9 and 3/4 at King’s Cross station – if you haven’t queued with huge crowds of Spanish schoolchildren on a school trip to pose for a photo pretending to jump into the wall have you even lived? 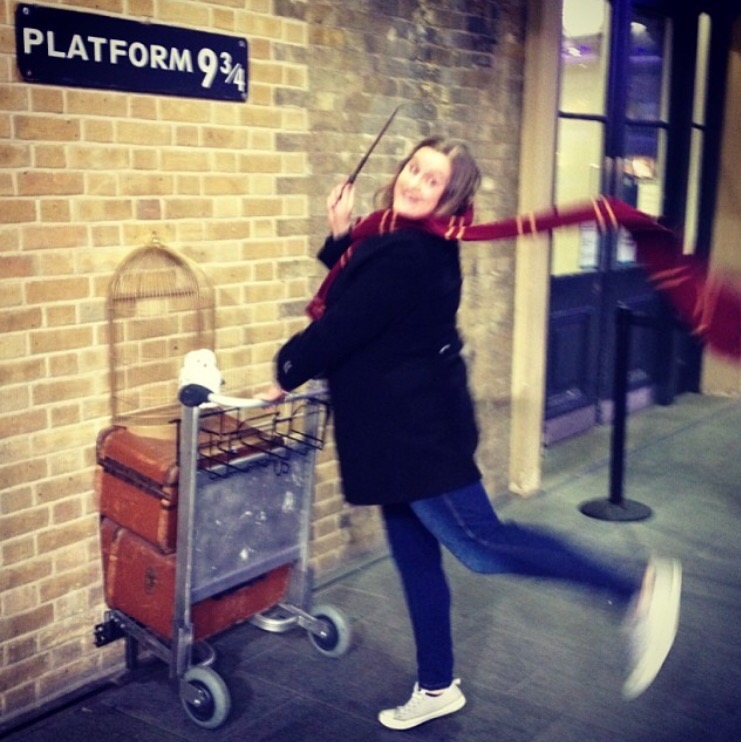 The food – oh my god, the food. The brunches, the lunches, the bottomless boozing, the late night dining, the fact you can get a dosa for £3 in Tooting but will also gladly spend £50 on eggs and coffee at the Chiltern Firehouse (they balance each other out, surely?). The fact a really good pub with a really good Sunday roast is only ever 5 minutes walk away. The best afternoon teas in the world on your doorstep. Beer gardens. Chinatown. Amazing coffee everywhere that makes it really hard to stick to your New Years resolution of not buying coffee anymore 🙄. The steaming food markets of Borough, Camden, Spitalfields and beyond.
(NB: yes the following are all brunch photos – The Ivy, Chiltern Firehouse and MILK Balham – because apparently that’s the only food I photograph). 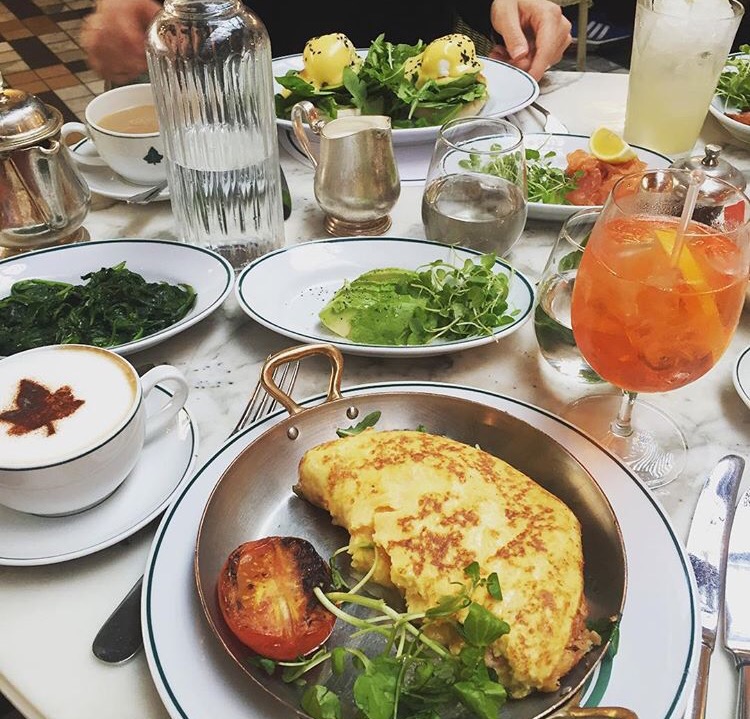 The rows of tightly packed terraced houses and terracotta chimney pots that steam in the winter. The dull murmur of traffic, the rattle of a train, the buzz of the Heathrow airpath overhead. The newspaper seller at Bank who cries GEEET YOUR EVENING STAAAANDARD like something out of a Charles Dickens novel. The local newsagent owner who knows my name and raises his eyebrow and says ‘ASOS?’ every time I go in (I mean he’s not entirely wrong to assume that). The most calming tube announcer in the world at Stockwell station, who MINDBLOWINGLY is not a Jamaican woman but an Indian man. The Uber and cab drivers who you can have a good old chat about life, love and politics with.

The fact this city brought me closer to my oldest friends and brought me wonderful new people who I now can’t imagine my life without.

How I wish all of this had sprung immediately to mind when that girl wondered out loud what on earth the appeal of London beyond Buckingham Palace was. London, you wonderful, eccentric, eclectic, unique city. It is so good to be home.

Leave a Reply to Therese aka mommy Cancel reply

I'm Ceri. At 31, I've decided to up sticks from my flat, job and life London (temporarily) and take the plunge into solo backpacking. I have a plane ticket to Bali and, after that, who knows. For the first time in my life, I don't have a plan and it's a combination of terrifying and exciting. Follow my blog for updates on my journey and experiences - and follow my Instagram @cerirohini for endless food, beach and scenery shots.