The final leg of my Bali and Lombok island hopping adventure took me a short trip across the sea from Gili Air to Gili Trawangan. The biggest of the archipelago of three Gilis, Gili T has made a name for itself as the livelier island and the place backpackers go to party (over the course of my 5 days there I saw a very beautiful island that is far from ‘just a party island’, more on that later).

And ready for a party I was. I checked into Gili Castle backpackers hostel for one of their legendary Sunday pool parties.

I’d arranged to meet up with my friend Emma, who I met working at Sanctuary in Worcester years ago and moved to London just before me. She was travelling Indonesia too with friends and I hadn’t seen her since she left for Oz last year. I was so excited to catch up with her and we had a great afternoon drinking Bintang (and admittedly a couple of tequilas) in the pool with other revellers, 99% of whom were also from Clapham. It was good fun; I’ve never in my life been to Ibiza or Marbella style pool parties but I imagine this to have been the Gili’s own slightly low rent (but perhaps more fun because who wants to wear heels with a bikini?) version. 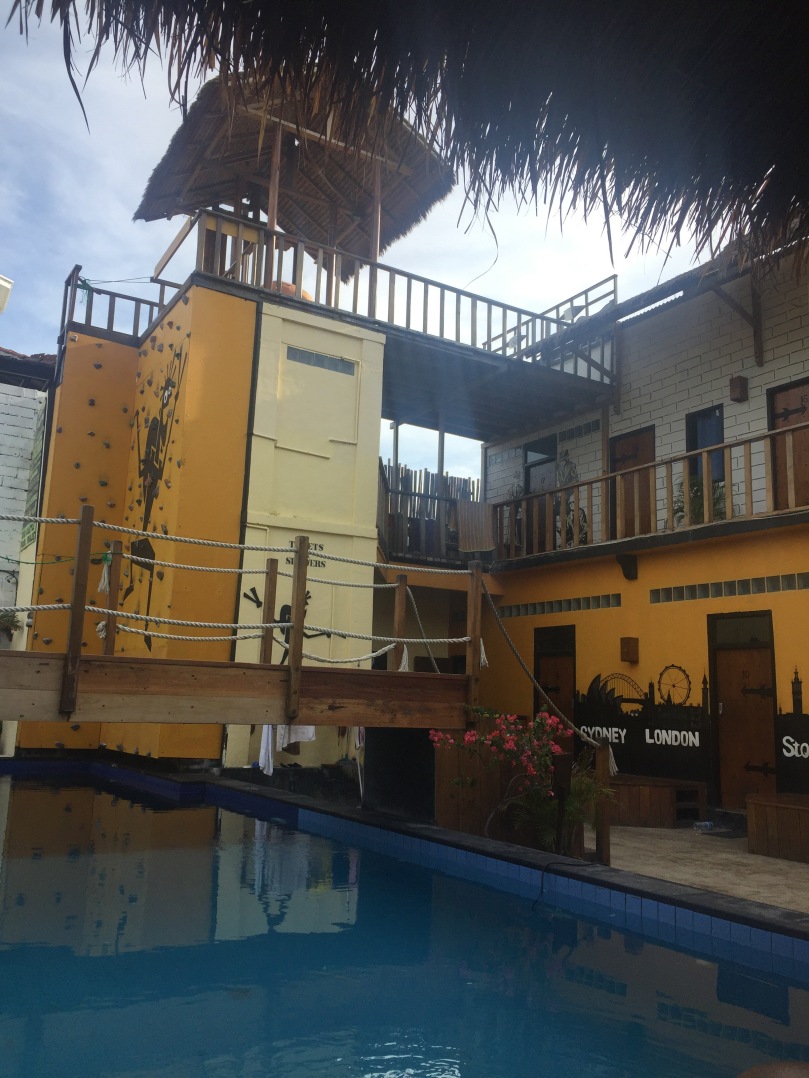 Later in the evening I put blusher AND eyeshadow AND mascara on for the first time in almost a month and my one ‘really nice’ playsuit which as yet hadn’t seen the light of day (EVERYONE was right when they said I’d live in the same pair of denim shorts for three months). We headed out to the main strip along the seafront of the island. The music was a bit hit and miss and trancey for my liking, when all I really wanted is to show off my best Beyoncé moves, but it was fun to be out and we saw others from our hostel along the way. I can however recommend Sama Sama, who had a live reggae band and was by far the most lively place we stopped off at.

At one bar we ordered a drink and I remember thinking it didn’t taste right to the point I couldn’t drink more than a few sips of it – this is not like me. At the next bar I started to develop a headache and couldn’t even face drinking alcohol, so decided to stick to water. Shortly after that, after one bar of trance and dance music too many, we headed home.

Reflections on my night in a party hostel

So I have nothing against Gili Castle. They do what they do well and their staff are great. If you want to party with young, friendly people on Gili T, stay here. But if you value your sleep and creature comforts like yours truly, I suggest you don’t – you could even stay somewhere quieter and just pop round to Castle for drinks with other travellers.

I knew very well what I was getting into when I booked two nights here, but hadn’t really considered the fact that even after some of my wildest nights out I have needed a good night’s sleep. Also news flash: I’m 31, and have been doing this for 16 years, and maybe I just don’t want to party for two or three days straight anymore – and that is ay okay.

I had already been warned that my larger than life dorm mate from San Francisco – let’s call him Bob for anonymity’s sake though I highly doubt Bob will ever read this – considered himself something of a ladies man and indeed I witnessed him crack on with pretty much anything with tits and a pulse. PLEASE DONT LET HIM BE IN THE ROOM WHEN I GET BACK, I prayed. Lo and behold, I walked in to my room at 2am to find Bob having a great time with a random woman in the bed near mine – light on, legs fully akimbo. They didn’t seem intent on stopping when I walked in, so I dutifully waited outside the door for them to do their thing (thinking WHY AM I DOING THIS DEAR LORD GIVE ME SLEEP AND NICE ROOMMATES the whole time) and a few short minutes later they both shuffled out like embarrassed teenagers. It was in that moment that I decided party hostels ain’t my bag.

This was the night that I got really, really ill. I won’t go into the details but it was horrendous at the time, and I actually phoned my sister because I was so beside myself that I convinced myself something seriously awful was happening. Sorry again Nina for worrying you at 11pm when you were trying to sleep and  I’m not entiiiiirely sure what I thought you could do from the UK. The hostel staff were understandably concerned and quite literally arranged for me to be carted -via a horse, which is precisely what you need when you are so ill you can barely keep your head upright -off to Gili T’s answer to hospital.

I had been to a couple of ‘doctors’ about my burn on Gili Air and realised they were glorified pharmacists so I was relieved to be seen by actual medical professionals at the Blue Island Medical Centre. They were, in some ways, really good. They thoroughly examined me, hooked me up to an IV and gave me an injection and a blood test straight away. They were sweet and soothing when I cried actual rivers every time I tried to talk. Or move. They insisted I eat, and got me some plain bread and black tea later on in the day and escorted me to the toilet dutifully. What they didn’t do is explain what they were doing much over the 12 hours I was there, or what they actually thought was wrong with me – it was only on my medical report when I left I read that I had gastroenteritis and dehydration.

With a raised eyebrow the doctor said he suspected I had had a lot to drink. I tried to protest was that no, I didn’t actually drink a lot, and I carried a huge one and a half litre bottle of water around with me all night much to the amusement of other revellers. I had been tipsy but I definitely wasn’t drunk and this was like no reaction to alcohol – or hangover – I have ever had. I told them about the drink that tasted funny and made me feel instantly unwell, even though I ordered imported spirits, and straight away he guessed which bar I had bought it from. He said it was possible the drink had made me ill and helpfully told me “many had died” from methanol poisoning in drinks in the area and I should be more careful – but he seemed to be reluctant to confirm whether it was definitely the cause or not. I found this reluctance, being kept mostly in the dark all day and that the doctor immediately knew which bar I had visited and consumed the weird drink in quite odd. All I know is I’ve never been so violently ill or passed out from food poisoning, so I do suspect it was something to do with the local spirits – but will probably never be sure.

I was discharged with a whopping £400 medical bill – which I’m trying to claim back as we speak – and the loose reassurance that I would be fine.

A few days R&R and exploration

And of course, I was. As soon as I was discharged from the hospital I left Gili Castle. I desperately needed sleep and to be somewhere quiet. I checked into a wonderful small hotel called Little MG. I cried with joy when Irwan, the wonderful wonderful host who looked after me for my entire stay, showed me my huge bedroom. IT HAD AC AND A TV AND A FRIDGE AND A PRIVATE POWER SHOWER OMG. 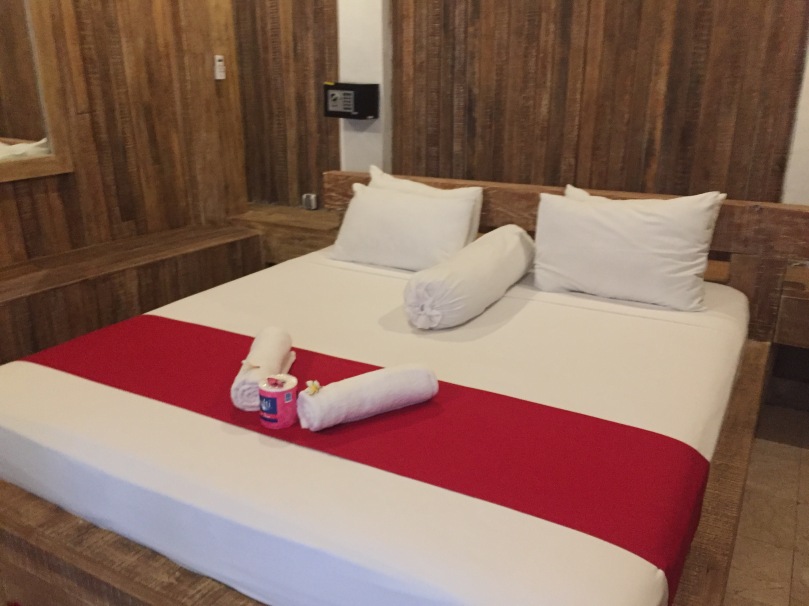 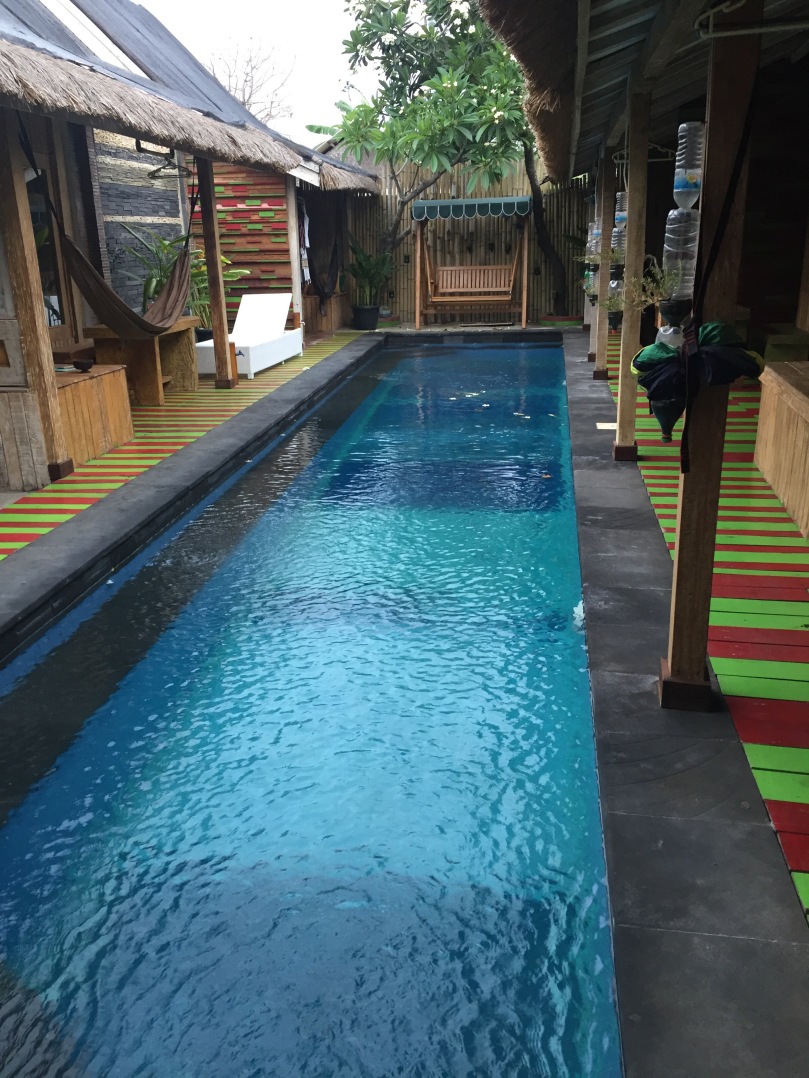 For 36 hours after getting back from the clinic I slept in the huge double bed, lay in a hammock reading and drank tea which Irwan made me. By Wednesday I felt up for leaving my guesthouse to meet Emma and say goodbye as our time together had been cut shorter than anticipated. By Thursday I felt normal again. I hired a bike and (gently) cycled the whole island, which was amazing. I stopped off at Le Pirate Beach Club which is an absolute DREAM – the staff are amazing, the decor is beachy and rustic and you can choose between a seafront infinity pool or lazing in a macrame hammock on the dreamy white sand beach. I also felt able to eat normal food again so went to town at their cafe with a fancy salad and a couple of exotic juices. 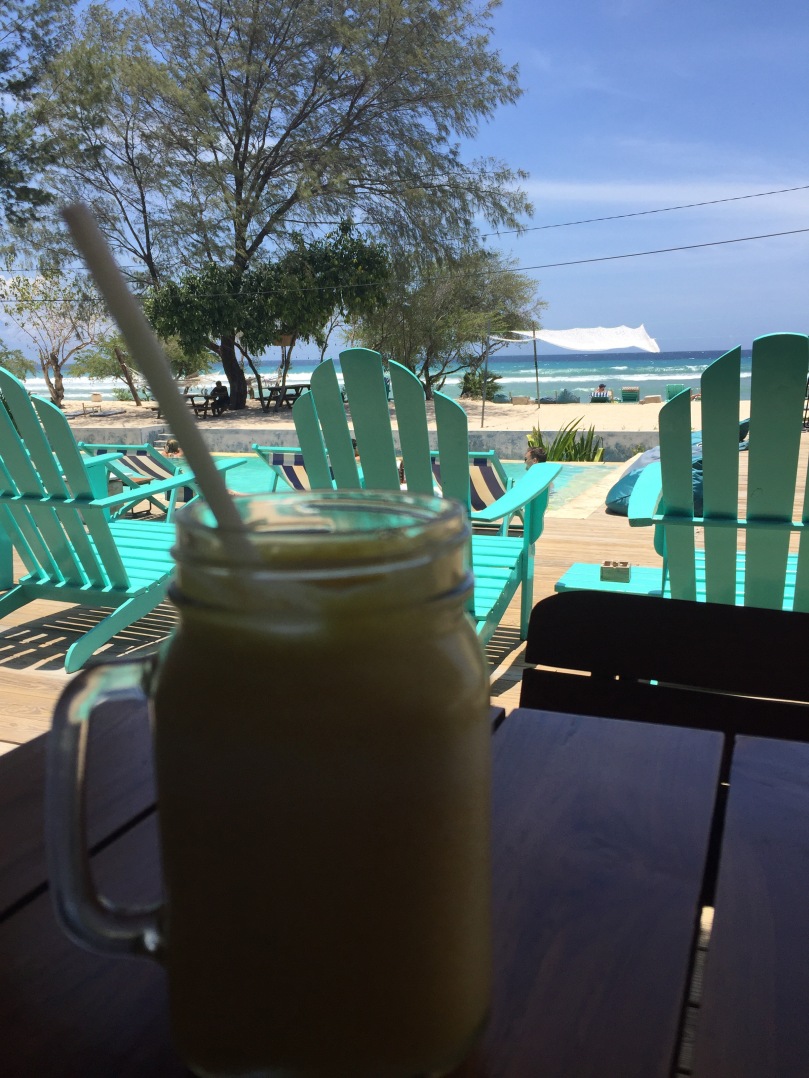 Why I ended up loving Gili T

Once I felt better and could appreciate my surroundings, I had a really good time on Gili T. Yes, it’s a party island in parts. Yes, there are groups of annoying drunk Brits and Aussies on the strip late at night. But it’s so much more than that! I met travellers from all walks of life – solo travellers, honeymooners, groups of friends – who were totally on the same page as me. It is host to some fantastic restaurants, which I was lucky to sample in my final few days and is some of the best food I’ve eaten in Bali. On particular recommendation is Pituq Cafe – their vegan food is simply amazing. The Gili T Night Market is also a must, fresh barbecued squid sate for 20,000IDR and a huge plate of Nasi Campur for the same is a bargain dinner. 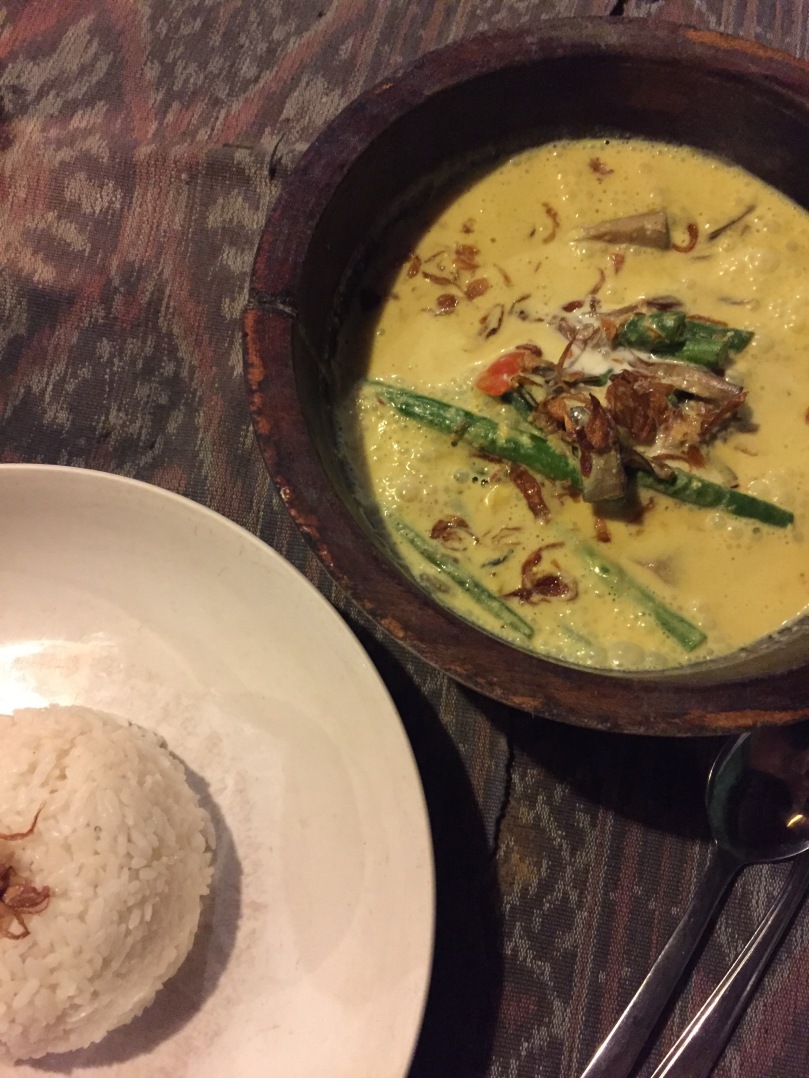 If you head to the opposite side of the island from the pier and strip of bars, you’ll find empty beaches, clear turquoise water, rustic beach shacks with coconuts a-plenty and excellent snorkelling.

If I had to choose, it would always be Gili Air because the vibe suited me more but I would urge fellow travellers not to write Gili T off completely, at least give it a go for a daytrip and cycle around the island. If you are going to stay there, please please please check out Little MG – I had such a lovely time there in the end and felt so happy, relaxed and content by the end of my time there despite the week’s dramas. It is an absolute sanctuary and really reasonable for what you get.

My island hopping now over, I headed back to the mainland to make my pilgrimage to Ubud, Bali’s spiritual and cultural capital of Elizabeth Gilbert fame.

One thought on “A tale of two islands, part two – Gili Trawangan”

I'm Ceri. At 31, I've decided to up sticks from my flat, job and life London (temporarily) and take the plunge into solo backpacking. I have a plane ticket to Bali and, after that, who knows. For the first time in my life, I don't have a plan and it's a combination of terrifying and exciting. Follow my blog for updates on my journey and experiences - and follow my Instagram @cerirohini for endless food, beach and scenery shots.